Elephant
Loxodonta africana, Elephantidae
RWP-SL-115924
Fox, Red, Cross
Vulpes vulpes, Canidae
RWP-SU-64588
Coyote
Canis latrans, Canidae
RWP-U-9472
Alligator, American
Alligator mississippiensis, Alligatoridae
RWP-3D1-6468
Fox, Red
Vulpes vulpes, Canidae
RWP-65280-3
About Lennie & Uschi Rue III
While Leonard has been a professional wildlife photographer all of his life, Uschi was introduced to photography after they met in Alaska in 1991. Both nature enthusiasts, they quickly realized they had many of the same interests and, falling head over heels in love, they got married and have lived happily ever since… well, most of the time anyway. 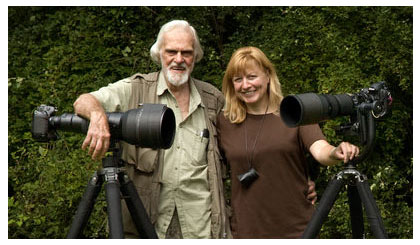 We feel fortunate that we both love what we do and appreciate that we can spend much of our time together. Our photography is a joint effort in every way, thus our credit line reads Lennie and Uschi Rue III.

> About Leonard
Leonard Lee Rue III has been a photographer for over 70 years. Leonard’s passion for photographing wildlife and nature has taken him to all seven continents. He was raised on a farm in Northwest New Jersey and he insists, he is a naturalist first and foremost.
Leonard sold his first photograph when he was nineteen years old and went on to become the most published wildlife photographer in North America.
He has over 1800 magazine covers to his credit and has taken over one million still photographs. He has produced over two and a half million black & white photographs and his work has been published in every major nature magazine, and most minor ones, in the country. His photographs are used in books, advertisements, for posters, calendars, puzzles, T-shirts, clocks, cups, caps, brochures, etc.
As an author, Leonard has 31 published volumes that have sold over five million copies and has co-authored an additional seven books. Repeatedly cited by the N.J. Assoc. of Teachers of English for literary excellence, Dr. Rue is a charter member of New Jersey’s Literary Hall of Fame. He has also received the following awards:
Dr. Rue and his wife, Ursula, operate Rue Wildlife Photos, a digital stock image library. In 1989, in addition to still photography, Dr. Rue expanded his photographic knowledge and expertise into the field of videography and created Leonard Rue Video, a stock footage library. Shooting on assignment and continuous photographic trips, he amassed over 3,000 hours of broadcast quality Beta SP and DVCAM video footage and 1300 species of wildlife, nature and scenics, which has sold to companies and corporate producers for television programs and educational and advertising purposes, as well as being used in his own productions.
He has produced twenty-three educational and instructional videos, including An Eye On Nature, The White-tailed Deer, Birds of the Dooryard, Wolves and how they live and a series of The Lenape Indians.

Dr. Rue’s books include The Deer of North America, which was heralded as “a notable achievement”, a distillation in easy-to-read language of just about everything known about deer. How I Photograph Wildlife & Nature, a compilation of the skills and individual techniques developed during his many years as the nation’s most published wildlife photographer and How To Photograph Animals in the Wild, co-authored with his son, Len Rue, Jr.
Some of Dr. Rue’s other books include Way of the Whitetail, The Deer Hunter's Encyclopedia, The Deer Hunter's Illustrated Dictionary, Beavers and Deer Hunting Tips & Techniques. Dr. Rue’s latest book Whitetail Savvy was published in September 2013, featuring the complete life history of the white-tailed deer with new facts, new findings, new pictures.

Dr. Rue writes with the authority of one who has lived with his subjects and knows their every habit, habitat and haunt through personal research, as well as printed material gathered during years of research. Drawing from these materials stored in bulging files, research reports from many countries and clippings gleaned throughout the years from periodicals and newspapers, and the 17,000 plus volumes in his personal library, Dr. Rue’s books and articles are thoroughly documented studies written in a very readable style and are well-laced with his own photographs.

His first lecture was given at the age of twenty-two and, over the years, he has given more than 4,000 lectures and seminars for schools, professional and civic groups and clubs. He taught outdoor education classes for years and has traveled the nation presenting wildlife travelogues, seminars on deer and the wild turkey and, with his son Len Rue Jr., an all day seminar on photography.

Dr. Rue, raised on a farm, has spent a lifetime studying, photographing and living with wildlife in its natural habitats. His studies and photographic assignments have taken him throughout the world, from the searing heat of the desert to the iciness of the mountain peaks, to Alaska for fourteen summers and to Africa for seven, as well as to Europe five times, Asia, the Galapagos Islands, Australia, Antarctica and South America in addition to his extensive work throughout the continental United States and Canada.
“It’s a never-ending job”, says Rue. “The life sounds glamorous, but there’s a lot of hard work and discomfort involved.”
This did not deter Leonard Lee Rue III in his pursuit of excellence—in research, in writing, in photography. Sometimes it meant standing or sitting motionless by a mosquito-infested waterhole, waiting for animals to come for their evening drink, and then perhaps not getting a single photograph or frame of video footage. Sometimes it meant being pursued by the very animal he intended to photograph. But, whether clambering over sleeping walruses on a beach, having a bear enter his campsite and curl up under his hammock for a nap or being charged by a wounded Cape Buffalo, Dr. Rue’s life has been filled with the unusual.

Whether it is as author, photojournalist or foremost authority on wildlife, it is the same man, fascinated by wildlife and intensely concerned with interpreting its beauty and encouraging each and every person to treat it responsibly, humanely and with an interest in both its future and our own.

To date, Leonard still writes columns for Whitetail Times magazine and photographs wildlife at any opportunity.

Dr. Rue’s driving force throughout his life has been the biblical admonition  Mark 9:23
“Canst thou believe, anything is possible to him that believeth.”

> About Ursula
Ursula (Uschi) was born and raised in Germany and immigrated to Canada, when she was 21 years old. She lived and worked in both, Calgary and Banff, Alberta, for 10 years before she met Leonard during a hiking trip in Alaska. Always an avid outdoors person, she enjoyed living in the Canadian Rocky Mountains, taking advantage of the unending possibilities of hiking, skiing and camping, whenever possible.

Uschi very much enjoys her work today in wildlife and nature photography. "Having learned so much about wildlife from Leonard, whom many call a “walking encyclopedia”, I treasure spending many hours with the animals we photograph, while watching and learning more about them."

People often ask "What do you do when you sit in a blind for hours, while waiting for wildlife?" Most people think it is quite a boring task. I'd say, a blind is a wonderful place to be. When nothing is happening, you have the rare opportunity to think without disturbance, enjoy the quietness around you, gather thoughts and ideas for projects and jobs to be done - it is never boring. Critters that come close, don't know you are present and go on with their usual activities, which you seldom get to see. Yes, I've been tempted to take a book to read, knowing that I would spend hours in the blind, but I agree with Lennie, who has always cautioned against doing so. When you get involved in reading, you are not paying full attention to your surrounding and with wildlife you often get only one chance to take a picture and seconds to make your move. If you're not ready, you missed it.

One early morning, Lennie and I were set up in blinds about 20 feet from each other. No, no talking there either! While we were waiting for ducks to come to the pond, I heard the slightest noise to my far right. Glancing over, I spotted a juvenile red-tailed hawk on the ground, about 30 feet from me. Excited to see the unexpected visitor, I slooowly swung my lens over, got it in my viewfinder and started taking pictures. The hawk kept looking to the ground and started pecking at something. I zoomed in a bit closer to see what he might have caught. To my dismay, it was one of the red squirrels that frequent our bird feeder.
Immediately I felt the urge to rush out and chase off the hawk in the hopes he'd let go of the red squirrel. Thinking before acting, I realized that the squirrel was most likely fatally wounded, the hawk was hungry and needed a meal and this simply was a part of nature happening. A moment later the hawk flew off, taking the squirrel and leaving me, quite disturbed, behind.
Hours later, when we checked the images on the screen, we could see that the red squirrel had been a nursing mom. We only had a few red squirrels at the property and she probably was the one we had watched two weeks earlier when she was moving her babies, carrying them one by one in her mouth, from a wood pile to a rock den, right close to where the hawk had caught her.
Now I really was disturbed and concerned about the survival of the little ones in the den. I started contemplating how I could possibly get to the babies for a chance for them to survive, because mom wasn't coming back! Lennie instead, calculated the age of the babies and assured me they were old enough to leave the den and fend for themselves and would be just fine on their own, having plenty of natural food available to them.
Sure enough, the next day, Lennie got fabulous pictures of the little guys, out of the den, feasting on delicious new buds and leaves. 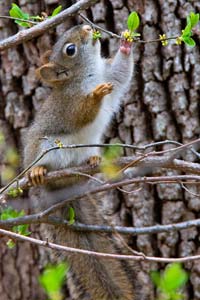 They returned to their den a few times and soon found our bird feeding shelf and were feeding there too. Over the next months, we had great fun watching four young red squirrels growing into adults.

I’m glad I wasn’t reading a book in the blind. I probably would not have paid attention to the slight noise I heard.
Besides photography, Uschi’s job description ranges from: editor, office manager, technician - Leonard says, without her technical skills none of the digital photography would be possible - video editor, animal handler, etc., etc.

Uschi loves working with animals. Over the years, she has had the fantastic opportunity to raise critters like fawns, a flock of turkeys and a snake, among others. In her spare time she loves to search for photographic subjects.

Big or small, we photograph them all.

We use cookies to enhance site navigation, analyze site usage, and assist us to improve your website experience.